*Important notes:
– Language in Bahasa Indonesia.
– The number of seats are limited to 500 seats.
– Registration does not mean that you are guaranteed to have a seat. We strongly suggest you log into the webinar as early as possible to secure your seat.
– Please kindly sign in to Zoom 15 minutes before the webinar begins.

In addition, Drs. Arustiyono, Apt., MPH. as the director of BPOM the director of cosmetic supervision also gave an informative opening speech for cosmetics production businesses and their supporting actors. In addition to material regulation, this seminar also discussed topics ranging from the ASEAN beauty market, the growth of the cosmetics business in the digital world, how to make cosmetic brands able to keep pace with millennials, up to the trend of packaging that is currently in trend.

The seminar was attended by 200 participants. The participants were very enthusiastic about the answers to their questions which greatly provided more knowledge to the beauty industry.

There are still many other knowledge that you can get in beauty industry. See you at the Cosmobeauté Indonesia 2019! 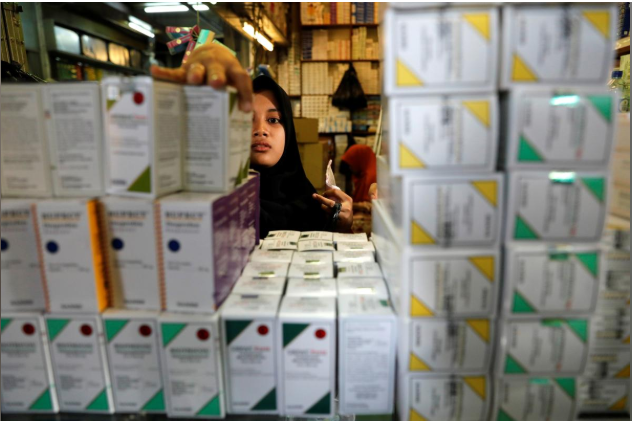 JAKARTA (Reuters) – Indonesia will push back by as much as seven years an October deadline for halal labels on food, drugs and cosmetics, after industry voiced fears the move could bring chaos and threaten supplies of life-saving vaccines and other products.

In 2014, the world’s biggest Muslim-majority country adopted a measure for labels certifying whether products are halal, or suitable for consumption in line with Islamic laws. If not labeled, they would face sale bans.

A presidential decree giving industries a transition period of several years to comply with the law now awaits President Joko Widodo’s signature, said Sukoso, the head of the panel overseeing the process along with Muslim clerics.

“We’re preparing the infrastructure now, for example a halal information system,” added Sukoso, who goes by one name. “We hope the process can run smoothly and we can reach every corner of Indonesia.”

The food industry would be given a deadline until 2024 to get halal certificates, said Sukoso, the chief of the Halal Product Assurance Body (BPJPH), though he declined to give a date for compliance by the drugs industry.

Parulian Simanjuntak, head of the International Pharmaceutical Manufacturing Group representing drug firms, said government consultations showed the industry would have until 2026 to comply, but that might not be enough.

Simanjuntak said the definition of halal was too strict and would mean life-saving products, such as vaccines or drugs containing blood, could be barred after the deadline passed.

It would be impossible to force drug companies to create halal-specific products for Indonesia alone, since the country has a relatively small share of the global market, he said, adding he was concerned it could create “some kind of chaos”.

Originally intended as a voluntary step, the law was meant partly to help boost exports to Muslim countries by upgrading halal certificates issued by a group of clerics, the Indonesian Ulema Council (MUI), that is recognized by few countries, as it is not a government body.

Getting certification is costly because businesses have to fly auditors from the MUI to factories overseas to check that raw materials or steps in manufacturing meet the halal requirements.

The government has not yet announced the prices of halal certificates in the new scheme, but Sukoso estimated an annual total cost of 22.5 trillion rupiah ($1.60 billion) across industries will yield additional income for the government.

“We are pushing for the BPJPH to work with other halal certification bodies in other countries, so that our imports of raw materials can go through faster,” Lukman said.

News article created and reported by Reuters. The original article can be read here.

Gangnam Medical Tour Center invites you to the K-Beauty Roadshow!

Gangnam is the medical tourism city that provides premium medical services at the highest level, where the “Gangnam Style” song of Korean Wave Pop Star PSY, which is visited by 6 million foreign tourists, is born.

With world-class medical technology, state-of-the-art medical equipment and facilities, and excellent professional staff, Gangnam receives the best medical service from the most prestigious medical staff in every field, from general hospitals for severely ill patients to cosmetic and plastic surgery and dermatology.

With exceptional premium service for Gangnam, medical tourists around the world are choosing Gangnam as the best medical tourism destination. We invite you to a high quality service that you can meet only in Ganganam.

To find out more about the K-Beauty Premium Roadshow, visit their website here.