Let’s welcome 2017 as the 7th edition for CosmoHair Indonesia that held in conjunction with Cosmobeauté Indonesia, being a whole new hair experience for the hairdressing world in Indonesia this coming October to a new hall, Hall A & B, Jakarta Convention Center (JCC), Indonesia. 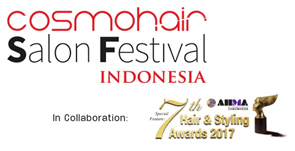 CosmoHair Salon Festival Indonesia will be held with line-ups of program such as hair show and hair forum specially catered to the hairdressing pioneers, leaders, owners and hair stylists. It is also proudly to announce that Asia Hair Masters Association (AHMA) originated from Hong Kong, will have its first collaboration with CosmoHair Indonesia.

Asia Hair Masters Association (AHMA) which now having branches in Taiwan, Singapore, China, and Myanmar. Not to forget, AHMA will be celebrating its 7th Anniversary of Hair & Styling Awards at CosmoHair Salon Festival by bring the international competition and hair show to Indonesia for the very first time.